Really excited to talk about Quarto

I want to get a feel for everyone’s experience today, so I’m going to start out qith a quick poll

before i get into Quarto.

For people who’ve used these kinds of things before, Quarto has two really cool differences.

One is that it’s language-independent, so anyone can use it

The other is that it adds a language called Observable JavaScript that makes learning JavaScript easier.

These two things give Quarto a really strong basis for helping data scientists learn to build compelling visualisations for the web.

(Code for these slides is at https://github.com/jimjam-slam/talk-runapp-quarto-2022)

I’ve been working for 360info for about 9 months

We’re a research-driven newswire, and we give everything away for free under Creative Commons so that all journalists can benefit from it

We’re founded by Andrew Jaspan, the man who also founded The Conversation

As our team grows, I’m doing some of everything: 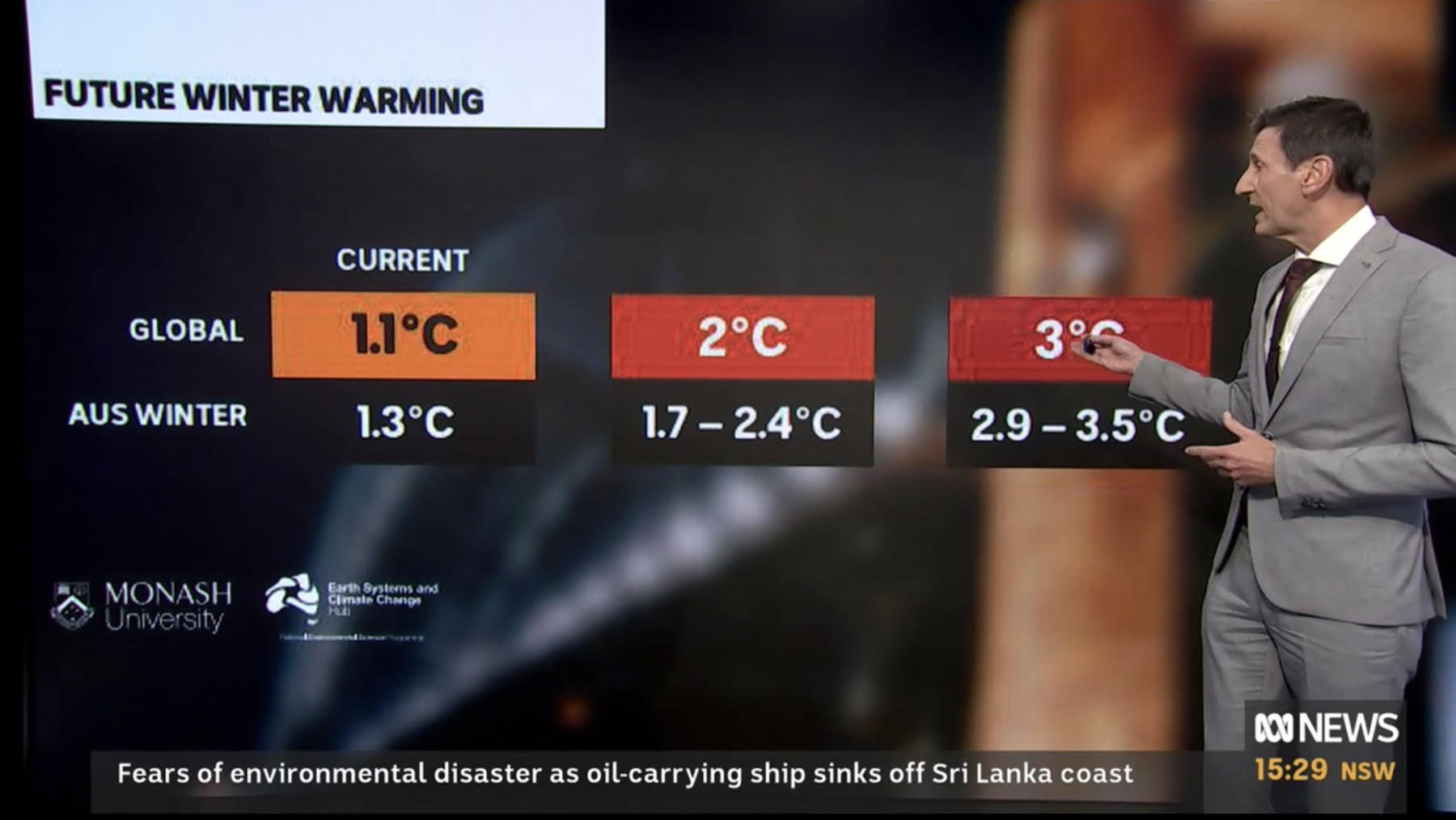 I used to be a climate + health researcher

Worked with CLEX and MCCCRH on climate change communication

Now I’m a data journalist with

Poll: what tools do you use?

No personal info in this poll, just 2 Qs

Take a moment to fill it in on your phone

Normally if you wanted to do a poll in a presentation, you’d use a third-party website like Slido and embed it

For today’s poll I decided to take a risk and build it entirely in Quarto. 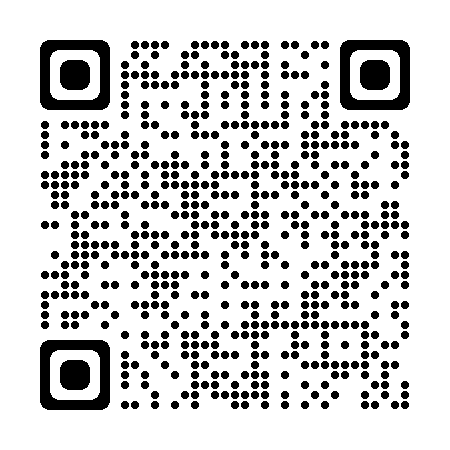 Take the survey at https://forms.gle/EdADv8GvDxUrrRmy8

What are
reproducible reports?

If you work in Python or Julia, you may have heard of notebooks

All examples of literate programming

Readable even if you didn’t write it

File format is opaque and hard to version control 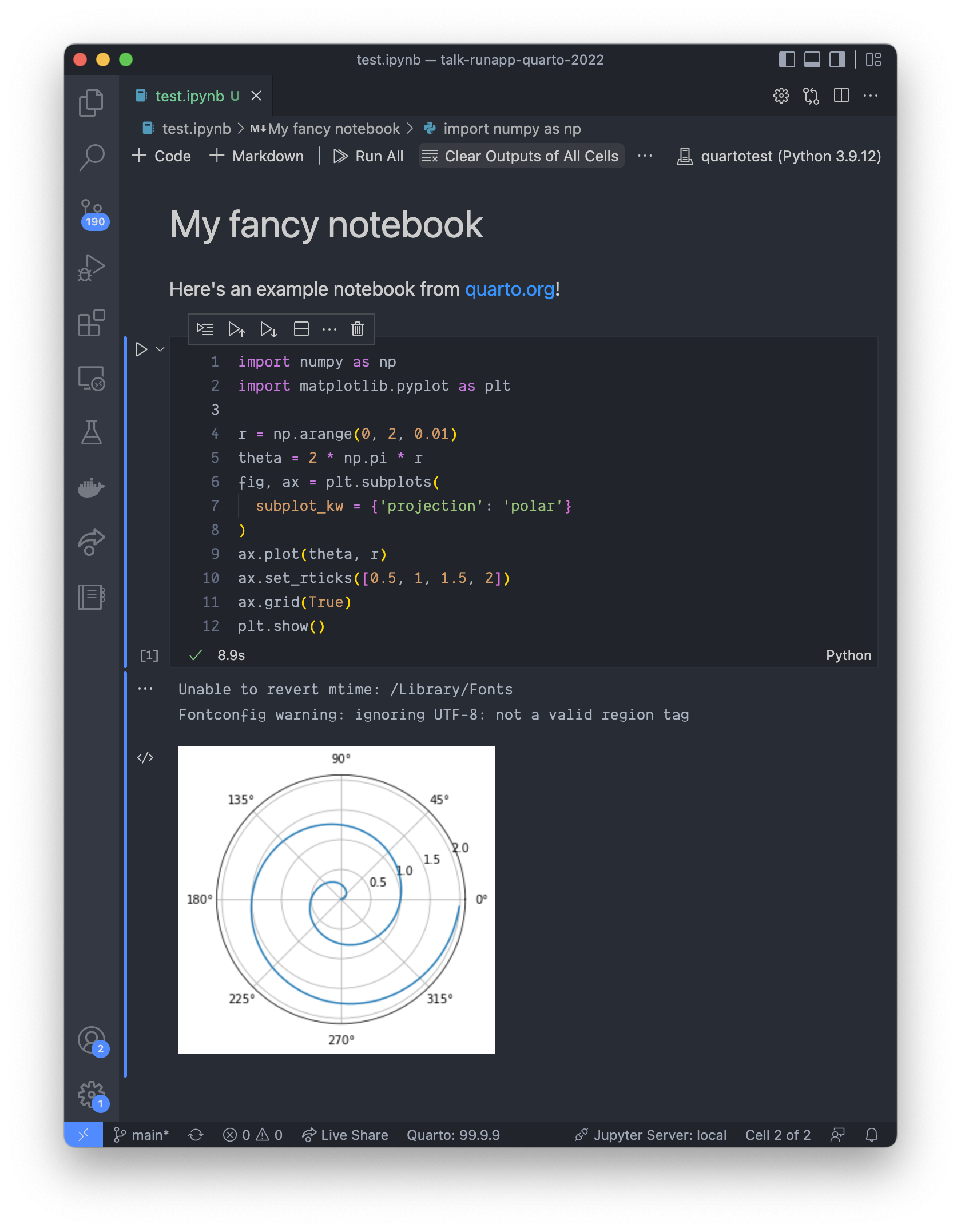 Instead of code and results together, we render a source document

Contains writing and code, but not results!

An R Markdown document is rendered. The final report is a separate file!

Easy to see changes over time in version control

Need R to run it 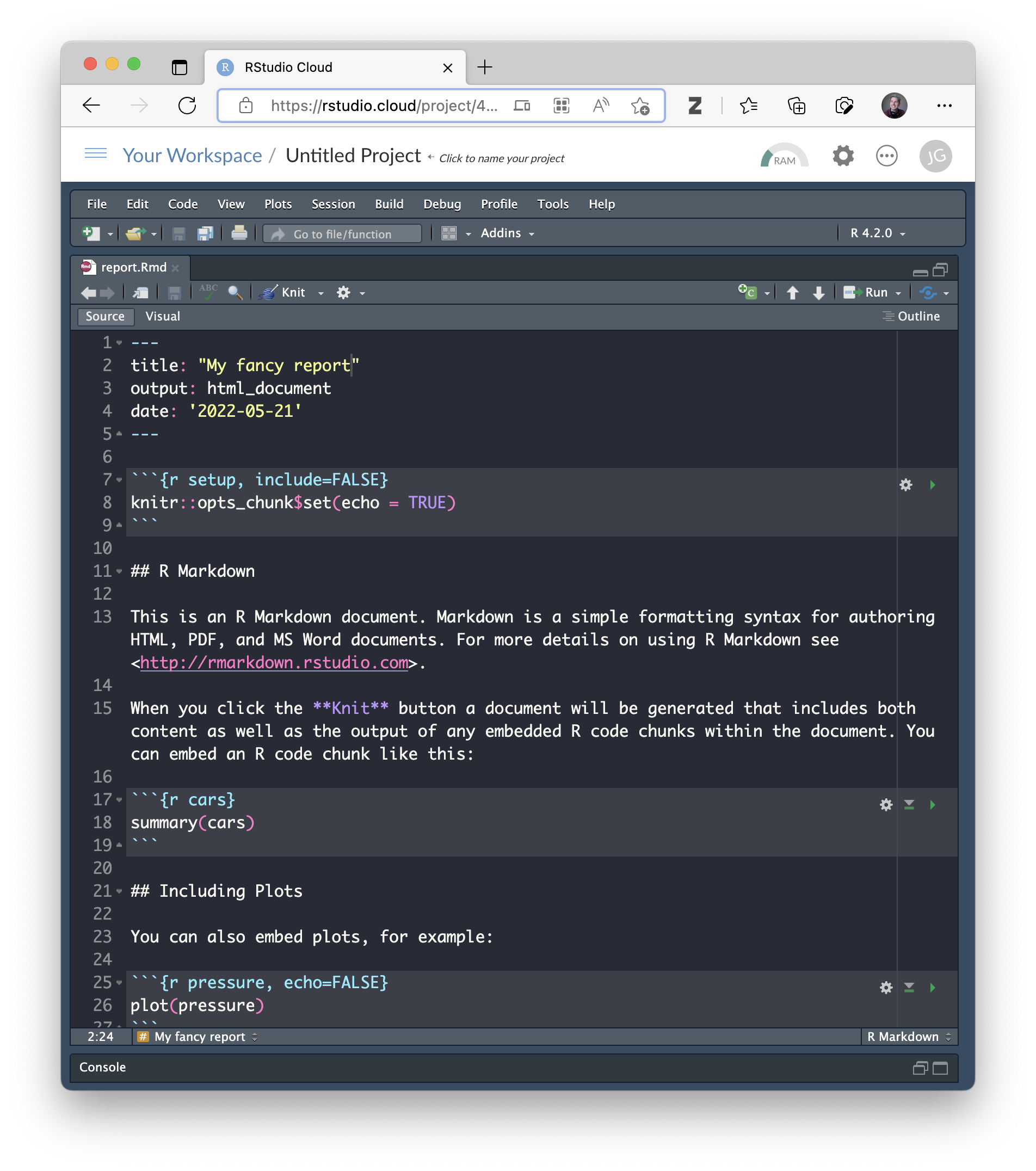 Because R Markdown gets rendered, it can make lots of different kinds of documents!

R packages for just about every kind of document:

So we have two very different approaches to explaining your data.

Notebooks are a really nice writing experience, and it’s good to have code and results in one place.

But they’re difficult to share or collaborate on without dedicated services.

RMarkdown docs have a massive ecosystem for lots of different outputs, and they’re very clear and easy to share. But not everyone uses R!

Quarto tries to have its cake and eat it too.

You don’t have to choose between writing in notebooks or documents - they both work!

Here we have a Quarto report, written two different ways: a notebook and a document.

Either of these can be rendered - into a webpage, a blog post, a slideshow, a Word document, a PDF…

If you’re used to documents, Quarto ones look almost the same!

We still have chunk options (cell options for notebook people). They sit as special comments at the start of the cell, and they’re written in YAML. You can add them to notebook cells too!

Frontmatter still works largely the same as RMarkdown, but you can add it to notebooks too! 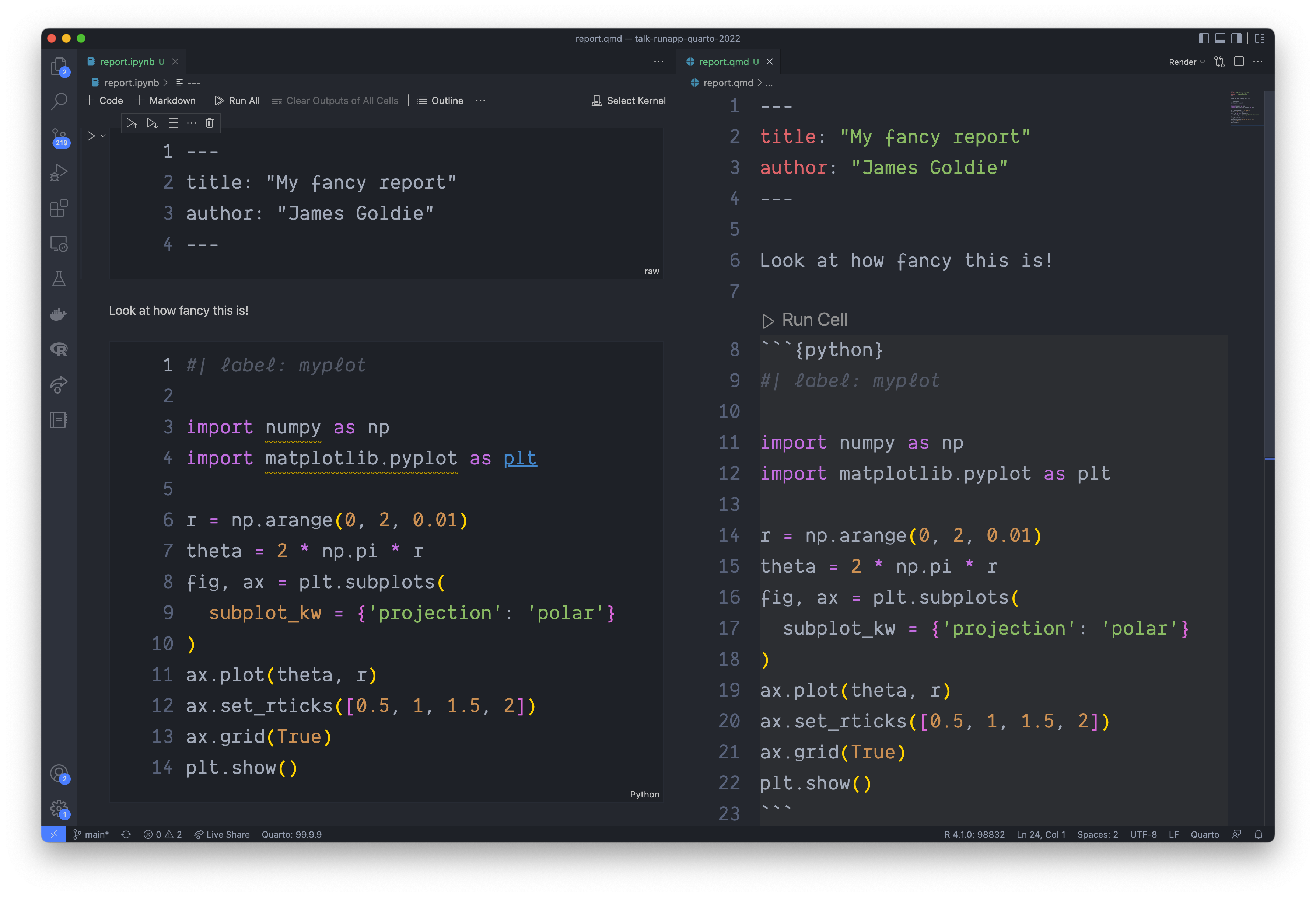 The other big change here is that you can use your favourite language in either format.

You can write Python chunks in a document like the one on the right, and you can render it without needing to have R installed.

On the flip side, you can write R cells in a notebook. Or Julia. Or all three!

Quarto is a separate tool that runs in the shell. It comes with everything you need, except the programming languages you want to use.

The examples I’ve shown are in Visual Studio Code, which is a code editor that I love.

Quarto works really nicely there. It even has a help panel that switches languages as you type!

Quarto also works fantastically with the JupyterLab editor and with RStudio.

If you use RStudio and you’re used to writing documents but like the way notebooks look, you don’t even have to choose!

RStudio has a notebook-style editor for documents.

You can switch back and forth as you like, and it has a command palette to help you insert things.

R Markdown has been able to include code from other languages for a while, but I think this is a really big step to facilitating cross-language collaboration.

For someone who only works in Python or Julia, it’s a really tough sell to ask them to install R and several packages in order to write documents.

With Quarto, you can have a website with people contributing posts as a mix of notebooks and documents in any (or all languages). 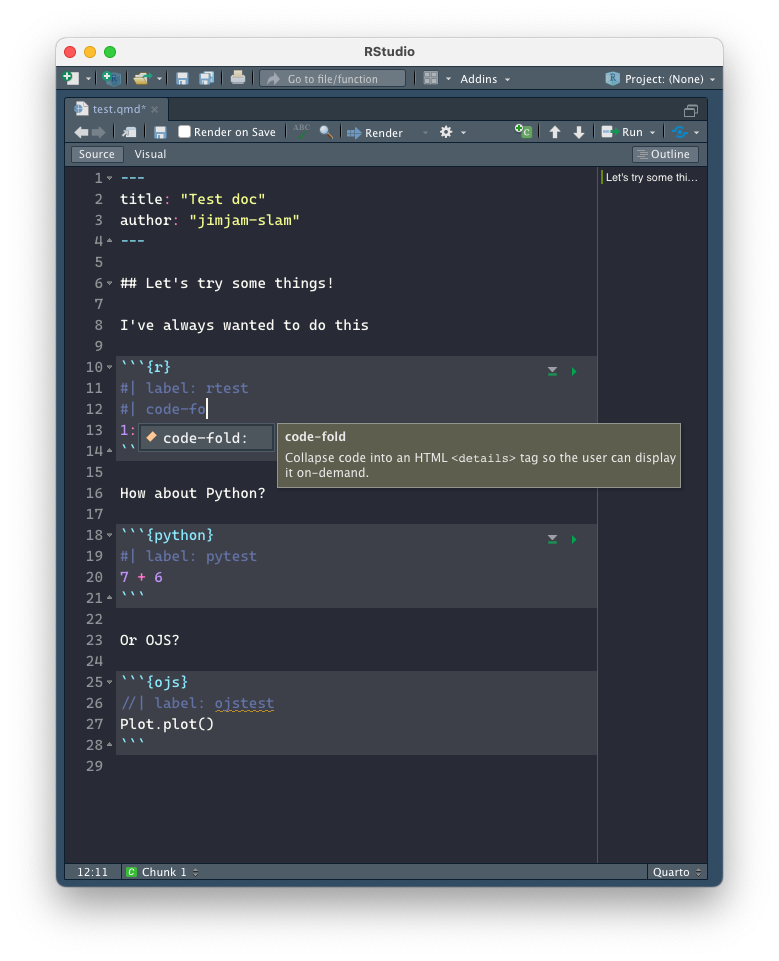 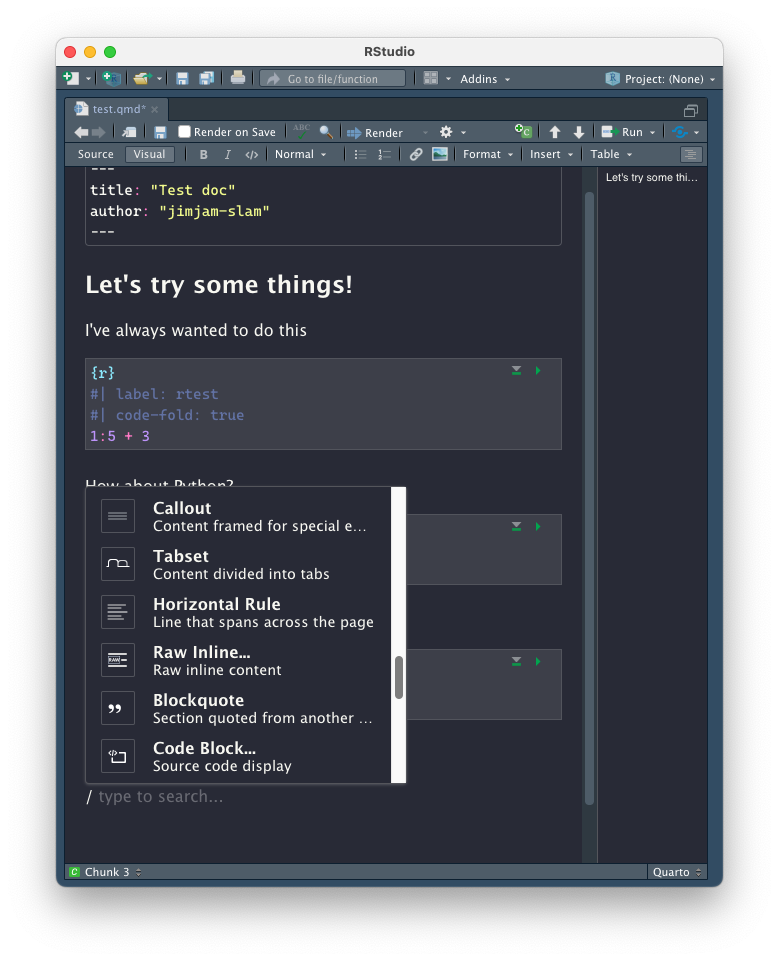 Spicing up Quarto
with reactivity and Observable JS

It’s called Observable JS, and it can make your reports, your books and your slides reactive.

So when we render our document, code runs and it changes how the report looks.

Maybe it creates a plot from some data, or prints some statistics.

But sometimes we want our document to change as it’s being read.

We want to let users to make decisions and for the document to react to things changing.

So let’s say we had data on footy scores for different teams over a number of years.

We could try to make one graphic that shows all the data, but it’s a lot!

We can let our chart react to the decisions our users make about footy team and year.

Code is usually about doing things

Programs and websites do this all the time! There’s a user interface with buttons and dials and sliders, and when we play with them, stuff happens.

But making that happen can be really tiring.

Web and app developers deal with this all the time:

That’s powerful, but it gets old really quickly!

This gets old quickly!

Describe a control or input

Describe an output that reacts to the control’s changes

(the output takes care of itself!)

This is how Shiny and Dash work!

So why not use Shiny?

Services like shinyapps.io serve websites to people, but they leave a copy of R running to allow things to react like this

But you need R running to react to things as people read the document, not just when you render it

So why not use Shiny?

My use is different to many of yours!

If you want to make something to be used internally, or by special stakeholders, Shiny is great!

In media, charts could be viewed 100k+ times in days

I can’t afford a Shiny server for that kind of traffic!

It lets us write JavaScript that is naturally reactive

We make a slider called x…

… and then reference it:

The text reacts to the changing value of x. Nice!

This is really powerful. If we don’t need a special server to make charts that react to users, they can be as popular as we like!

I can put Quarto documents on GitHub Pages, Netlify, or even Cloudflare Pages, which has unlimited bandwidth.

You get great libraries bundled in to try out JS:

Remember our survey before? That was doing data analysis on-the-fly with Arquero.

These are basically dplyr or pandas verbs!

Remember the survey before?

I did that with Observable Plot and Arquero.

Here’s the code I used to tally up survey responses:

Use the whole web

And when you’re ready, you can use any other JavaScript library

This was a chart we built recently showing that many commercial satellites are used by governments and the military too.

This uses the d3-euler library, as well as a popup library called micromodal.

There’s a lot we could do to improve this, but the actual JavaScript being used here would look very familar to an R or Python user!

… whether you use R, Python or Julia

… whether you write in a code editor or a notebook editor

Quarto help you make documents that react to users

Between these two features, I think Quarto has a really powerful funnel effect

Learning a new language or framework is a big commitment.

Do you try to learn something on the weekend, hope you stay motivated and that you’ll have the time on top of the rest of your life?

Or do you take a risk and try to build something for work using a language you don’t know?

It’s taken me years to start using d3.js for exactly this reason

A checklist for trying Quarto

🔴 Download Quarto from quarto.org and have a look at the Guide

🟢 Switch out one of your charts for an Observable Plot chart

🔵 Try switching some dplyr or pandas verbs for some Arquero verbs